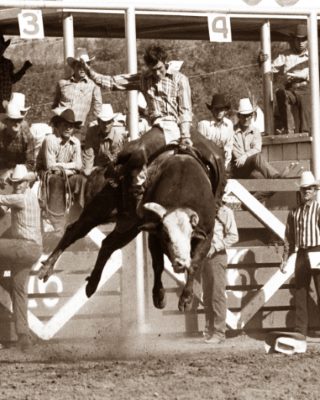 Once upon a time...
Probullstats made its debut in February of 1999, largely due to the efforts of then PRCA Bull Riding Event Director Bryan McDonald. Prior to this, Bryan regularly mailed copies of some PRCA bull riding judges sheets to most of the top bull riders to help them keep up with the performance of many bulls in the PRCA and make informed travel decisions based on the quality of bull they had drawn at any given rodeo - particularly when they were unable to make all the rodeos they were entered in.

In 1999, when Bryan first contacted me about helping launch Probullstats, I knew little about the internet and next to nothing about building and maintaining a web site. But we made it work, and posted plain text versions of the judges sheets. Bryan typed all of these up from copies of the actual handwritten sheets, and that year we posted results from around 150 rodeos.

Since late 2002, we've been storing the judge's sheet data in a database, and drawing the web site information from that, which has proved to be a huge improvement. Since then, we've processed results from thousands of professional rodeos and bull riding events and have been able to provide consistent access to all of the data from those, and continue to add to the database on a daily basis.

Probullstats owes many thanks to the PRCA and the PBR for their continued cooperation. It would not be possible to maintain Probullstats without them. Black and white photos used around the site including the one above are used with permission from Jerry Gustafson - Gustafson Rodeo Photography or Thomas C Duncan Sr. The above Gustafson photo is 1972 World Champion and Bryan Mac's own personal hero John Quintana competing in Deadwood, SD in 1971

The current size and content of the database are conveyed in detail here.